We are delighted to announce the release of Koin 3.2. You can update to the latest version! Check the setup page.

Today, I would like to zoom in on a great feature from this new release, that will significantly help us write smarter Koin configurations: New Constructor DSL 🔍

Since the beginning, the core concept of Koin resides in providing a Kotlin DSL to help to write dependency injection configuration. Something easy to read and to write. The interest is to let you declare what you want, just through a simple function:

With just a few keywords around (module, single, factory ...), you are able to declare mostly everything and focus yourself on delivering value, not on your DI tooling.

The Koin DSL is not using any kind of code analysis to understand what is provided behind your definitions.  The key is to run the previously declared functions to build the collection of all your dependencies (also called "objects graph"). As we are using class constructors to build instances, we need to fill them with the right dependencies. This is why we need the get() operator, to ask Koin to retrieve dependencies for us:

Using functions to build instances allow us to work directly with pure Kotlin code and run dynamic behaviors (such as injecting parameters).

Since 2017, the time has shown that people like the Koin DSL. But it is not perfect, and the Koin community raised some points to be improved. Finally, Koin configuration files can break when you change the constructor of one component.

For example, let's add a new dependency "c" of type MyClassC to our class constructor MyClassB:

We need to add a declaration to our module for the MyClassC instance. But the module is not compiling anymore, because MyClassB's constructor has changed:

We need to fix MyClassB's declaration to let our code compile, by adding a new get():

A New Solution - The Constructor DSL 🎉

The new proposal introduced in the 3.2 release help declares components directly with their constructors. Our example above can now be rewritten like that:

How does it work? You declare your component directly in parenthesis (no more function needed), using the :: operator. This way Koin knows to call your class constructor to build your component.

The magic behind is that Koin will fill your constructor arguments with get() function, without having to write it.

We have to introduce new DSL keywords for each type of component and keep the same DSL semantic: singleOf, factoryOf, scopedOf, viewModelOf ...

Easy to remind: We have kept the previous keyword and have added the "Of" at the end of the name. You can find them all here in the documentation reference: core extended DSL & android extended DSL.  You can also find them on our Koin 3.2 Cheatsheet: https://blog.kotzilla.io/koin-3-2-annotations-cheat-sheets/.

The constructor DSL also allows to take into account any injected parameters:

The other very good thing is this is forcing us to rethink our writing options (naming, additional bindings ...). We are already using a class constructor as arguments, we can't also ask options in the same way.

We decided to extract options in a sub lambda. This finally makes it overall very readable, by passing them like below:

The options can be written with bind(), named() or even createdAtStart().

Even the bind() operator can be written directly without lambda:

Finally, the only case where you will have to come back to classical DSL is when you will use qualifiers. Koin can't guess which dependency between definitions with the same type. Let's take an example with a Repository with 2 Datasources:

Be aware of one last thing: if your class has a constructor parameter with a default value, the DSL will try to resolve its dependency. Think perhaps having your default values in a configuration object.

This new DSL can cover many cases to help you write your Koin configuration. Don't hesitate to give us your feedback at @insertkoin_io. 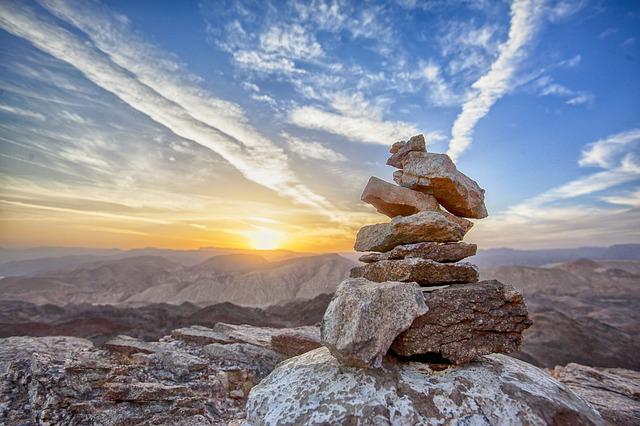 Let's take advantage of the relative slowdown linked to the summer period in Europe to look back on some great
Aug 1, 2022
3 min read
Jun
14 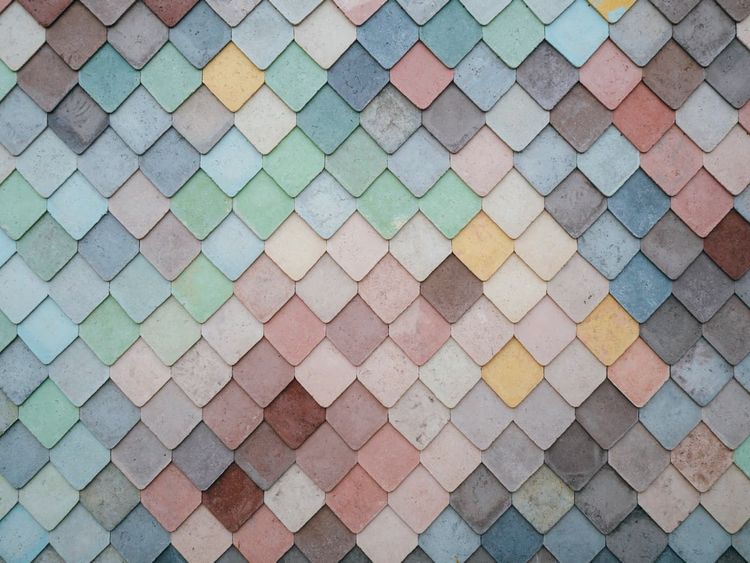 I’m happy to announce that the Koin Annotations project is now getting to its first stable version. With this, we are introducing a new way to declare modules, components, and new tooling capacity.
Jun 14, 2022
3 min read
May
19 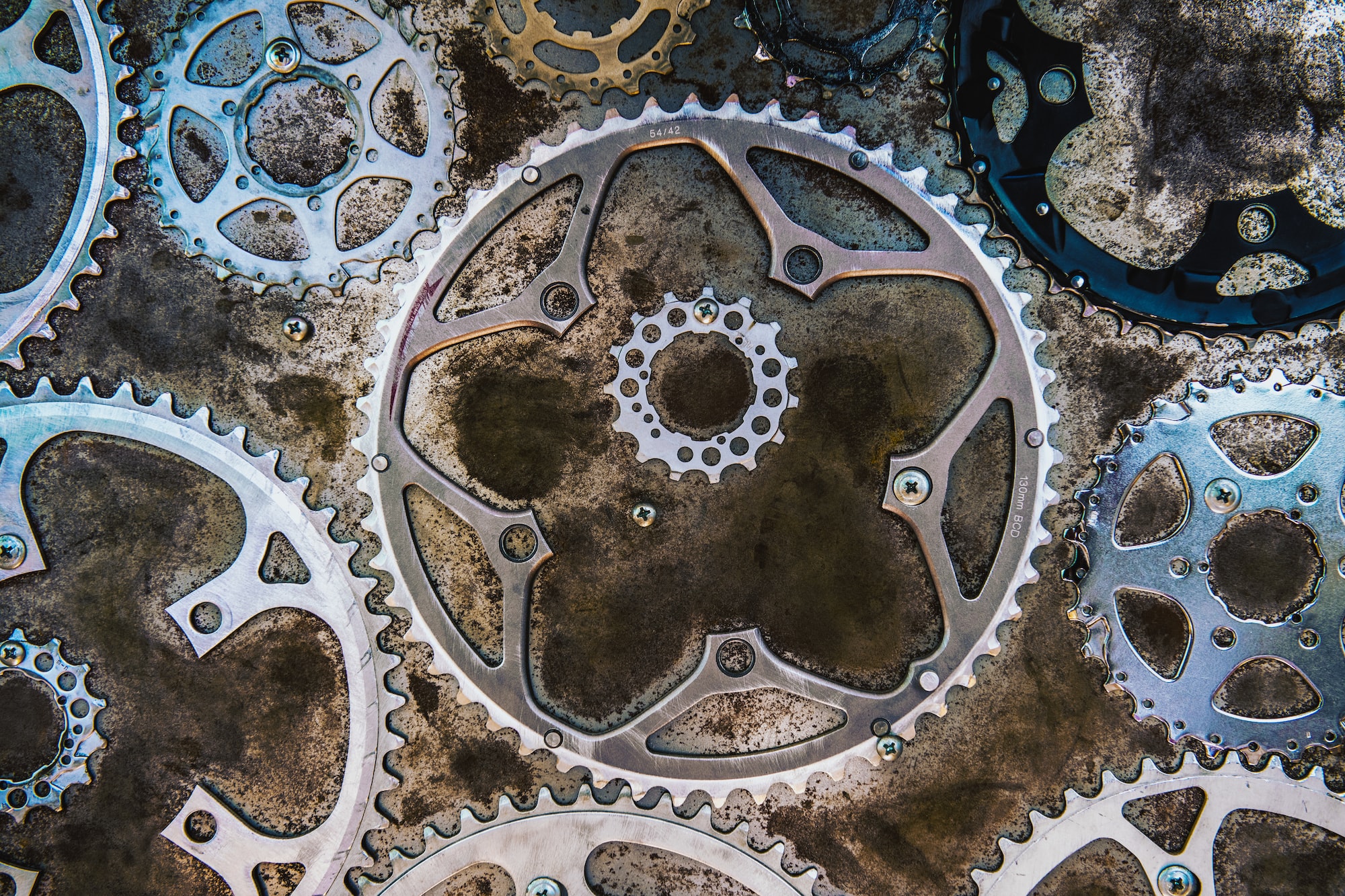 Inside Koin 3.2 - Optimizing your Modules with Includes

We continue to dig into Koin 3.2 release content. Let's dive into another great feature from this new release. A feature that will significantly help us write our Koin modules: module includes
May 19, 2022
3 min read
May
03 While online videos of my talks will show off in a moment, you can still take a look at my slides "Android Architecture Design With Koin"
May 3, 2022
1 min read
Apr
26 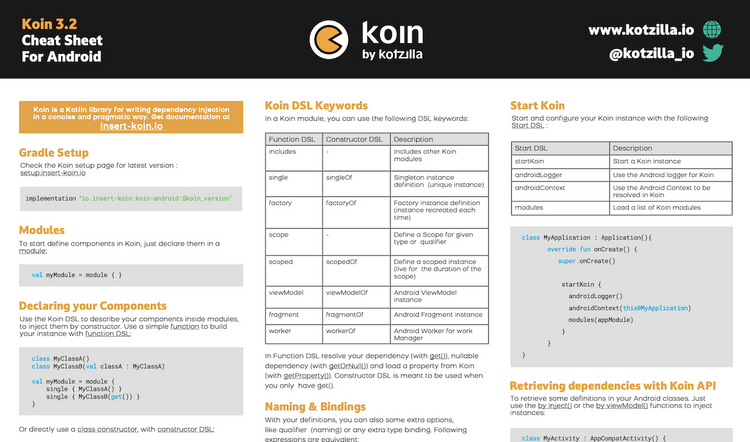 While we are at several conferences to show Architecture Design with Koin, Kotzilla is also offering some stickers and cheat sheets for Koin 3.2 and Koin Annotations 1.0.
Apr 26, 2022
1 min read